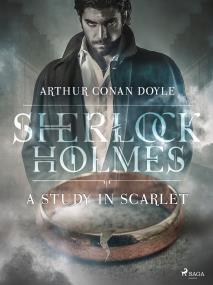 A Study in Scarlet

by Sir Arthur Conan Doyle
Returning to London from war, an injured Dr John Watson is in acute need of a place to live. An acquaintance introduces him to the eccentric "consultant detective" Sherlock Holmes, and Watson soon finds himself pulled into an alluring world of crime solving adventures. Told partly through Watson, partly through the murderer, ‘A Study in Scarlet’ (1887) is Arthur Conan Doyle’s first dip into the world of Sherlock Holmes, and one that would make him world famous. This first Holmes novel became the basis of the pilot episode of the extremely popular BBC show, 'Sherlock' (2010-2017), by 'Doctor Who' showrunner Steven Moffat, which starred Benedict Cumberbatch and Martin Freeman.


Sir Arthur Conan Doyle (1859-1930) was a British writer, best known for his thrilling stories about the adventures of the detective Sherlock Holmes. He published four novels and more than 50 short stories starring Sherlock Holmes and Dr. Watson. The stories are seen as important milestones in the history of crime fiction.